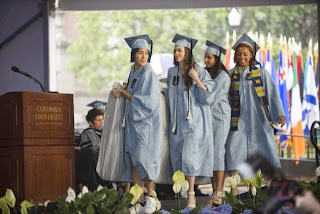 You probably saw the images of Columbia University student, Emma Sulkowicz (AKA "Mattress Girl") lugging her twin-size Serta sleeper across the commencement stage. (If not... move over! I want under your rock!) You might think "Mattress Girl" was just in need of some much deserved sleep after all-night cram sessions, energy-draining term papers, and late night college binge-drinking, so she was just being prepared by bringing along her own comfy place to nap. But you'd be wrong.

Sulkowicz began hauling around her bedding last September as part of her visual arts thesis (that means she was getting a grade for her antics). She claims to have been raped in her own bed by a fellow student at the start of her sophomore year. In the media circus that ensued, she told TIME magazine the mattress was a symbol of the burden that sexual assault survivors carry around every day. A very fitting and appropriately symbolic display to be certain. If she had stopped there, I would have paused in silent appreciation and solidarity with my suffering sisters. Because sexual assault is certainly no joke, and often leaves behind devastating traumatic emotional scars.

But she didn't stop there. She went on to label her burdensome mattress as more than a symbolic and moving piece of performance art. She also deemed it a protest against the way Columbia University managed her rape allegations. Which immediately made me wonder why the heck she went to university officials to handle criminal charges. Why didn't she go to the police?

But she did go to the police. Sulkowicz filed a police report in May 2014, just 21 short months after her alleged rape. She failed to complete the police report, however, because officers asked questions to determine the veracity of her claim and they told her that it could take nine months to a year for the case to actually go to court. So she walked away.

Apparently, they didn't handle it the way she wanted them to with their probing questions and thorough investigations. She claimed that it would be "too draining" to bring a rapist to justice through the proper channels and possibly prevent him from destroying the lives of other women.

So she went to the university's Office of Gender-Based Misconduct to file a complaint against her alleged rapist. Since it seemed like too much trouble to put her alleged rapist behind bars, maybe she could at least get him thrown out of school.

While Mattress Girl and her feminist media supporters might have you think that her charges were quietly swept under the rug with a hapless shrug and a careless wave of the patriarchy's hand, that doesn't seem to be the case. Paul Nungesser, Sulkowicz's accused attacker (whose name was made public by Mattress Girl herself, and also by her visual arts professor), was placed on restricted access to university buildings before the rape investigations even began, as "interim measures", making it appear that the university was, in fact, taking the accusations quite seriously.

A full investigation ensued, including a university hearing. Sulkowicz complained about the investigation including personal and graphic questions from the university court about details of the event (Newsflash: You can't have a rape trial without discussing the rape... no matter how uncomfortable it makes the alleged victim),

After the investigation, Nungesser was found "not responsible" and cleared of charges.

So it appears that Mattress Girl wasn't protesting rape at all with her cumbersome and distracting performance art. She was protesting due process.

Because what it seems like she wanted was to be able to cry "Rape!" and have the guy she pointed a finger at locked away, his life ruined, his freedom taken... without having to answer questions about the incident. Without having to go through the "draining" ordeal of a trial. Without having to wait for the time it takes to ensure the accused had a thorough investigation and a fair trial.

That's due process. It's one of the things that makes our judicial system great. It is one of the foundational principles of our country. We don't get to toss that out the window just because of the seriousness of the accusations. Even mass murderers are ensured a fair trial. We don't get to rage against the patriarchy (in spite of how many lives will be potentially destroyed) and flush our country's founding principles down a toilet of superficial moralism.

That's not the way things work, as frustratingly patriarchal as it might seem.

But it doesn't matter. Mattress Girl has already had her way. Due process be damned, Nungesser has already been tried in the court of public opinion with the media as judge, jury, and executioner. In spite of his name being cleared through all of the proper channels, it will always have a black mark thanks to media moguls pouncing on any hint of a college rape story, real or imagined, like hungry ravenous vultures (consider Rolling Stone if you'd like another example). There are enough people convinced that he did it, simply because he was accused. His name will turn up unwanted hits in Google searches for years to come. Every future employer will know and wonder. Every future potential girlfriend will know. He won't be able to outrun his media reputation. And rape is the scarlet letter of modern culture.

Cue the righteous feminist lynch mobs that turned out in droves of solidarity to support Mattress Girl. It's enough to make me want to turn misogynist (although I've already been accused of that). 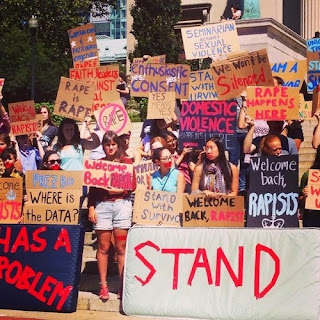 I don't know if Paul Nungesser is guilty of raping Emma Sulkowicz on that very mattress she's toted around campus for months on end. (I'm hoping she changed the sheets, just in case.) He might have, but there just isn't enough evidence to prove it. I do know that he is currently suing Columbia University for smearing his name, and he has a bunch of Facebook messages that he believes solidly prove his contention that all of their sexual encounters were consensual.

What I do know is that both sides use rape as a weapon of power. The actual act of raping a person is a display of violent domination and control, an act of out-of-control bullying to the extreme. But a false accusation of rape by a jilted or angry lover, is just as much an attempt at domination and control, just as much an extreme act of bullying. Both are damaging and scarring and life-changing. Some just carry the scars on their souls. Others have their scars on their lives and reputations for the whole world to see.

I do know that Emma Sulkowicz walks away from this entire escapade with international fame and national awards (which might just be based on a lie), while Paul Nungesser slinks away attempting to maintain a frail grasp on his shattered reputation and threatened career prospects.

So who is the victim here?

But that's why we have due process...


Accusers and the Accused, Crossing Paths at Columbia University (The New York Times)

'My Rapist Is Still on Campus': Sex Assault in the Ivy League (Time)

Columbia Student: I Didn't Rape Her (The Daily Beast)

There's room under my rock.

Sounds to be like she needed a prop and doesn't care who she hurts as long as she gets attention.

But your rock is probably cold, Robin. :P