Why My Kids Won't Have A Pinterest Perfect Summer 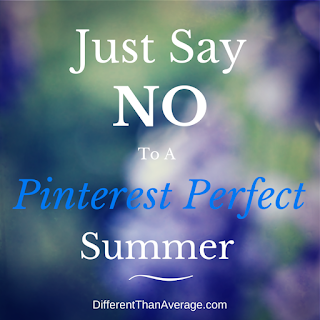 I know that it's summer. I know that a lot of parents are busy trying to keep their wildly free children, the ones who are usually corralled and occupied in climate controlled school rooms for ten months out of the year, from driving them crazy. Neither the parents nor the children are used to being around each other for hours upon hours of unstructured time every day. It creates volatile and sometimes desperate situations. There's a lot of energy out there, energy that is usually safely contained and controlled by the public school system.

I know this, and I'm tired.

No, it isn't my children that are making me tired. We are fairly used to each other's company (homeschooling gives us very little vacation time from one another. We've adapted over time) and we long ago reached a mutual understanding in regards to the level of pestering that I can handle before I begin to approach a mild level of insanity. I'm not tired of my children.

You're wearing me out.

How are you not exhausted? I'm exhausted just watching your summer play itself out on the internet (since you've been certain to capture every memory-making opportunity in digital form to share with the entire world).

In comparison my children must seem incredibly deprived. Their every moment hasn't been planned in minute detail by me. I know I'm squandering their childhoods by not throwing my every effort into making it magical and memorable. You can go ahead and look down your nose at me (I'm pretty used to it by now. It honestly doesn't bother me anymore).

It's okay. I want them to bored. (I hear your gasps of horror.)

One of my parenting mantras is, "It is not my job to entertain you." (Some of my other mantras include "Don't stand on your brother" and "Stop making that god-awful sound")

It's not. It's not my job to keep them entertained... even during the long, hot summer months.

While you might think I'm just being lazy and apathetic, you're only partially correct. Laziness and apathy are only part of the motivation behind my hands-off summer. By leaving them to their own devices, I'm giving them the freedom to open up their own world of endless possibilities, to get dirty and make their own fun. (Everyone knows that kid fun is way better than adult fun!)

By not forcing them to fill up their free time with projects I've carefully selected for them, they are instead forced to be self-directed. They are forced to create their own diversions, to seek their own interests, to ponder their own thoughts, to create their own stories. Freedom forces children to reach down and find their inner initiative, to set their own goals and to figure out on their own how to reach them. It gives them time to explore their own world, both their outer world and the more complex and mysterious inner one. They are being forced into creative problem solving, an important life skill to develop... one that isn't always formed with hovering adult supervision.

Just because I'm not actively striving to provide my kids with a fun and memory-filled summer doesn't mean they aren't creating one for themselves. It's already been a summer full of lemonade stands and captured fire-flies (kept in old mayonnaise jars, not the supper crafty Pinterest bedazzled ones) and board games and bike rides. They've finally had the courage to pick up that seventh Harry Potter book (607 pages seemed so daunting before... but what else are they going to do?). They've organized their own "play dates" and sleepovers, strengthening their social skills and powers of negotiation. They've created their own snacks from ingredients foraged from the back recesses of the kitchen cabinets. They've sketched and told stories and discovered toys they forgot they had.

And they've complained about being bored.

To which I always respond, "It's not my job to entertain you."

Because that's what I do. I'm mean like that. But maybe some day they'll realize just how good they had it with all that time and freedom to do whatever.

For now, they'll probably just grumble under their breath about me being the meanest mom in the world.

Thank you for making me feel a little more normal! When we were secluded in the mountains surrounded by other like-minded people I felt pretty darn normal. Letting the kids explore and create their own little worlds. Teaching them safety but ultimately trusting that they had it under control for the most part. But when I moved back here I felt completely WEIRD. Like I was lacking in some parenting brain cells. They were planting jellybeans to grow lollypops, doing strange rituals with the tooth fairy, going on playdates to Chik-fil-a, and constant state of "we are busy". I even tried it a little with Girl Scouts but found it too much for this lazy mom! LOL I am glad I am not the only one!!