It's Not Because He's Muslim! - How Treating Kids Like Criminals Breeds Violence 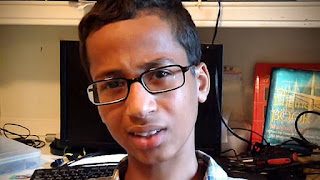 On Monday, a fourteen year-old high school student was handcuffed, interrogated, made to pose for mugshots, and humiliated all for bringing a homemade clock to school. Even worse... he was suspended.

Apparently, homemade clocks can look a lot like homemade bombs, causing teachers and administrators and police to blow things out of proportion. (See what I did there?)

While the media would like us to believe that Ahmed Mohamed's "invention" was overblown because of his exotically Muslim name and Arabic features (not to mention his family's religion. The Mohameds are definitely NOT Presbyterians), I beg to differ.

Sure we like to explode over racial and ethnic injustices, and Muslims with homemade bombs are easy to blast, but let us not forget the 16 year-old Florida honor student charged with two felonies for a simple science experiment, or the Texas student arrested for uploading a school map to a video game, or the 11 year-old expelled for bringing a maple leaf to school (Easy to mistake those maple leaves for marijuana apparently... I knew those Canadians looked suspicious. They are way too happy.), or the 10 year-old suspended for wielding his fingers like a gun, or the 7 year-old who nibbled his pop tart into the shape of a deadly firearm and was suspended.

This isn't about Ahmed's skin color or religion or his Sudanese background, in spite of what CNN and MSNBC might have us all believing. This is about stupid zero tolerance policies.

I realize that schools have to take even overtly ridiculous bomb threats seriously because of the public explosion that would ensue should the threat turn out to be real. The same media that has been set-off by the overblown treatment of Ahmed's bomb-mistaken clock would have mushroomed (So many bomb puns, so little time) to epic proportions had the clock actually turned out to be a bomb and they hadn't taken it seriously. (It's kind of a lose/lose situation for the schools... which might be why any outside learning is so often discouraged. Leave your curiosity and ingenuity at home, kids. That stuff doesn't belong in school.)

When did creativity and curiosity become criminal? When did schools start calling in the police before they even issue a call home to parents? When did simple behavioral issues start being treated like crimes?

No, it's not Ahmed's religion that landed him in cuffs. Even though I've yet to read a "news" story without the word "Muslim" in the headline, it's not about that. The children mentioned above were black, Chinese, and good ol' card-carrying members of white privilege. The insanity of zero tolerance knows no boundaries of race, religion, or socio-economic background.

The effects of these overblown bursts of insanity is far-reaching. There is the money the parents must fork out for lawyers and court costs to defend their children, time missed in school, children falling behind (You know that's going to affect their test scores), the possible criminal records that will follow these children through their entire lives, not to mention the psychological stress.

But these situations seem to sum up nicely the mindset of twilight America. We have an education system that is more devoted to brutal and monstrously idiotic authority than it is to actually teaching. We thrive on violence and punishment rather than creativity and compassion. When we are obsessed with violence, it's easy to see the threat of it around every corner, even in the hallowed halls of education. In fact, we are consumed by a fear of violence and guns so extreme it almost outmatches the fear of witches in historic Europe and colonial America.

The truth is, zero tolerance policies do nothing to protect kids. Punishing kids who bring bubble guns to school and shout "bang, bang" on the playground isn't preventing the next mass shooting. In fact, it could be doing quite the opposite. Treating students like criminal suspects is a fabulous way to breed contempt, paranoia, and fear... all of which ultimately lead to violence. Day after day of forced conformity, bag inspections, metal detectors, and locker searches are enough to make just about any kid snap. At best they'll hate their schools. At worst they'll be entertaining fantasies of mowing down their oppressors.

It's time we stopped tolerating zero tolerance policies... or the next school shooting might just look more like a prison rebellion or a slave uprising.

I hope Ahmed's clock wasn't set for a count down.
Posted by ajoneswebb at 11:45 AM