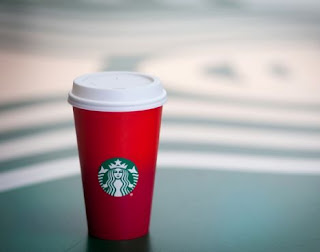 There's been quite a storm brewing. The internet is insisting that large groups of Christians have wadded panties about Starbucks' new boring, plain red, anti-Christmas coffee cups. By the multitudes of snarky memes and long-winded rants, one might come to the conclusion that large portions of the population are actually angry that Starbucks isn't decking out their cups with excessive amounts of holiday-themed regalia.

But they would be wrong. Because I've searched for those easily-offended, butt-hurt, whiny complainers, declaring the injustices of the whole coffee-drinking universe, and you know how many I've found?

It's true. No one cares. Except for a handful of crazy people (and they can't be for real), no one freaking cares if their Venti peppermint half-caff no-foam no-whip latte comes in a plain red cup.

The average American is just happy to have a vessel in which they can carry their coffee. The average American realizes that a cup is just a cup and there are other things that require their attention (like getting the kids through the drop-off line at school so they can get themselves to work on time and pay their mortgages and go on with the drudgery that is their everyday lives).

But some people just aren't satisfied. There will be a war on Christmas, dammit, even if it has to be conjured out of thin air. So people like Donald Trump jumped in and fanned the flames, convincing people that Starbucks is waging some sort of jihad on the most sacred of Christian holidays (wait... isn't that Easter?) and calling for boycotts and lease cancellations.

Then Dunkin Donuts jumped in and started lobbing their own overtly holiday-themed coffee cups at the competition.

That's right, this year's War on Christmas will not be waged with deadly fruitcakes. It will go down in history as the 2015 Battle of the Disposable Coffee Cup. Keep your heads low everyone. This one is going to be a bloody one.

But the internet has it all wrong. Starbucks' bold red cup isn't attacking Christianity at all. By leaving off the holiday swag, Starbucks is actually insulting pagans.

Gone from its seasonal cups is all of the beloved pagan symbology. No images of Old Man Winter or Odin Claus or polytheistic cavorting elves. No symbols of pagan fertility and immortality like evergreens and red berries. No yule logs. No pagan wreaths symbolizing the wheel of the year or burning candles to honor the old ones. No animistic reindeer or sentient snowmen. No idolized evergreen trees symbolizing sexual potency and reproduction. No jingling Wiccan ritual bells.

Starbucks is taking all of the spirituality out of this sacred season.

Starbucks doesn't hate Jesus. It's not like they've ever plastered images of baby Jesus on their disposable cups. But they have offered cups festooned and featuring boundless pagan imagery.

So who are the real victims here? Starbucks isn't waging a war on Christmas and Christians. This isn't an attempt at "Christian Cleansing".  Not at all. Starbucks obviously hates pagans.

Next thing you know, they'll be burning them at the stake.

Pagans roasting over an open fire will probably be their next seasonal coffee flavor.

Posted by ajoneswebb at 9:50 AM

hahahaha When I stop laughing I'm going to plaster this all over my social media!

Thanks. I'm glad it made you laugh. This whole coffee cup scandal is just hilariously ridiculous.

Awesome sharing! Keep it up... starbucksgiftcardbalance.com