I Just Don't Get It 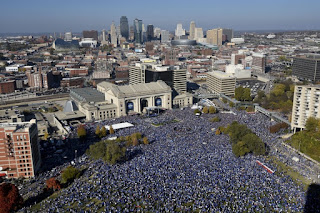 On Tuesday in Kansas City, an estimated 800,000 people took to the streets, a crowd so huge that it generated 7 tons of trash. Businesses closed. Schools cancelled classes. 1,200 patients at the Truman Medical Center didn't make their doctors' appointments.

Bigger, more important things were waiting for their attention than work, or education, or personal health. What could be so important as to draw hundreds of thousands of people into the streets?

It wasn't to vote or back a political candidate. It wasn't to demand more transparency or accountability from the people elected to represent us. It wasn't to protest the billions of dollars or the lives of our young people that our country spends on foreign wars. It wasn't to improve our failing education system or to protect our forests, rivers, or oceans. Droves of people didn't turn out to demand protection of the political freedoms that their own government is constantly chipping away. The crowd wasn't protesting discrimination, or demanding better job opportunities. The throng wasn't there to celebrate our veterans or demand a fairer criminal justice system. People didn't congregate in mind-blowing numbers to insist we repair our failing infrastructure or fix corporate corruption.

800,000 people took off work, and school, and shirked their daily responsibilities not to have their voices heard on any of the thousands of issues that affect their lives. This mob of people took to the streets, united in a march far larger than for any other cause in American history...

to celebrate the Kansas City Royals winning the 2015 World Series. To tell them "Thank you" for a season well played.

That's baseball for those of you not paying attention. I'm not much of a sports fan, and maybe that makes me see the monstrous celebration of a winning season achieved by a small group of athletes most people will never even meet as insanely superfluous. Sure winning the World Series is an accomplishment, that while arguably impressive, affects the average American in ABSOLUTELY NO WAY AT ALL.

But it sums the mindset of the United States up so perfectly. When things matter, we do nothing. We'll sit home on election day, and maybe grouse about how crappy things are, but we won't really do anything.

The pictures from Kansas City show just how capable we are of mobilizing the masses, even if only for stupid reasons. What a shame that as a nation, we care more about sports and celebrities and athletes than we do about the things that really matter. That we are more enthusiastic about backing a baseball team than a worthy cause.

It's rather disgusting really.

But maybe it's just because I don't understand sports.
Posted by ajoneswebb at 11:13 AM

hahahah, oh my gosh, I agree. I have a hard time geting into sports, unless I personally know/am related to people I am watching play. I just don't understand this kind of elation and joy over A SPORTS TEAM. And don't get me started on how much they are paid.