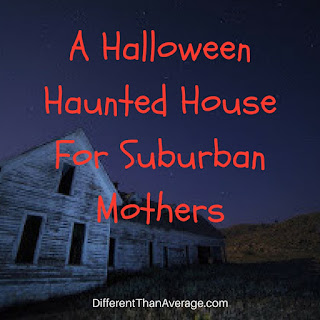 It's almost Halloween, the time of year when children thrill in being frightened. My kids have been pestering me to take them to a haunted house, one of those rural productions featuring a haunted hay ride and bad actors drenched in fake blood jumping out and screaming at you.

I don't want to go. They may think I'm just being lame, but they don't realize the truth. I'm not frightened by the stereotypical Halloween freak show. Zombies and witches and axe murderers don't scare me in the slightest. There are far more frightening things out there, things so terrifying it makes the blood curdle right in my veins.

For me, the scariest Halloween haunted house wouldn't contain chainsaws and ghosts and fake exorcisms. It would be far more hideous. I shudder to imagine... a haunted attraction like this:

I'm ushered through the door by a young boy who obviously can't find any pants and has been wearing the same spaghetti-stained shirt for days. He has a dirty face and messy hair, yet thinks he is suitably presentable to greet guests at the front door.

This frightening child pummels me with senseless questions and shouts of "Watch this, Mommy!" as I hesitantly peek into the first horrifying room.

This room is chilling, filled with political campaign workers, some of them with horrible toupees. In the background plays the most poorly produced political ads the television screen has ever seen, complete with senseless platitudes and generic empty political promises. The campaign workers claw at me, trying to cram fliers into my trembling hands. They plead with me to vote for their candidate, trying to convince me of the evil-doings of his opponent. I stumble away in terror and confusion, unable to decide which candidate is the lesser incarnation of evil.

In the next room I find a big screen television blasting an episode of Caillou at full volume. I scream in horror as I realize the only way out is to solve 25 impossible Common Core Math problems.

The next room contains a large bonfire. Upon entering, I realize that the fire is fueled by the papers of all of my unpublished writing. Around the fire dances a hideous witch who markedly resembles my tenth grade English teacher. As she dances, she screeches about the horrors of double negatives and sentence-ending prepositions. I shudder in panic as I try to remember if I used the Oxford comma. Is that blood dripping from her hands or is it the ink from her red pen? I run from the room screaming.

Next, I burst into a room teaming with well-groomed, perfectly dressed women. They all turn to look at me as I enter, conversation screeching to an uncomfortable halt. I feel the weight of their judgemental stares on my holey jeans and untied sneakers. I suddenly realize my bag doesn't match my shoes, and I panic. One overly-coiffed woman who appears to have a Botox addiction, whispers into the ear of the designer-dressed woman beside her about me being "THAT woman". I am filled with dread as I realize I must spend the next two hours nibbling cucumber sandwiches, smiling pleasantly, and engaging in vacuous conversation about the garden club.

In the final room of this twisted house of horrors. I find my youngest child hunched over a kitchen sink. She is blasting Taylor Swift from my very own iPod perched precariously on the wet counter. To my horror, she is handwashing my fine china! She's not really paying attention, so I call to her to be careful, but she can't hear me over Taylor's wailing of "Blank Space". She drops a wine glass and it shatters all over my freshly mopped kitchen floor. Then she senselessly drops another... and another. Next she reaches for my grandmother's gravy boat. I'm ushered out of the room wailing in dismay as she rolls her vacant eyes in my direction.


That, my dear sweet children, is a rundown of the terrors that creep into my nightmares. You can keep your tame vampires and werewolves and zombies. If you want to really frighten me, find a haunted house like that. Because there is nothing that would terrorize me more.
Posted by ajoneswebb at 12:41 PM