At the end of the day, providing a path to go to college is a helluva lot cheaper than putting people on a path to jail.
— Bernie Sanders (@SenSanders) December 13, 2015


It sounds right. It might even hit you right in the feels. No one should have to struggle to fund their own education. And as someone who received generous scholarships, but still had to hold down two part-time jobs AND borrow an insane amount of money to juice my own degree, you might think I would agree with him. I'm also the mother of four children with no idea of how to pay for their four-year university stints. Free college is an attractive and alluring concept... sort of.

At least in his tweet, with the assertion that college is cheaper than prison, Senator Sanders acknowledges that SOMEONE is going to have to fund all of that free education. But he's right... sort of. The average annual cost of college tuition falls in the $20,000 to $35,000 range (It's only $9,410 for state residents attending public colleges. But let's not forget that figure is out-of-pocket for students. Those schools are already taxpayer-funded). The cost of incarceration falls somewhere between $20,000 to $40,000 per prisoner annually.

However, when we take into consideration the average time spent on a college degree (six years) and compare it with the average length of a prison stay (surprisingly only 2.9 years), it is easy to conclude that sending young people on a path to prison might be more cost-efficient.

Of course I'm being snarky... sort of. Crunching numbers like that doesn't take into consideration which group contributes more to society. However, the number of college students graduating with crippling debt and few marketable skills is mind-numbing. The Economic Policy Institute reports that 16.8 percent of new college graduates are "underemployed".

Cost to the American taxpayer aside, there is one other problem with Senator Sanders' tweet: the implication that a path to prison is the most likely alternative to a path to college.

Mike Rowe, from Dirty Jobs fame, has already given a marvelous rebuttal to Senator Sanders' college-is-the-only-path-to-success sentiment. Not everyone needs to go to college. Not everyone should go to college. And the statistics show that a college education isn't a fool-proof ticket to the big times.

There are many other available paths, none of which lead directly to prison. Mike Rowe is a big proponent of trade schools and hard work. But there is another path that no one is talking about.

I find it incredibly ironic that the day after Bernie Sanders' controversial tweet this happened... 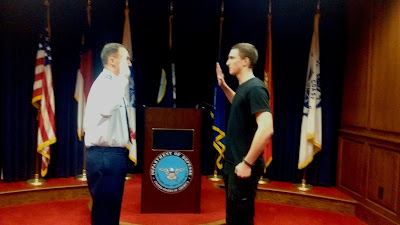 That is my oldest taking his oath of enlistment in the United States Army. He has rejected the social message that the only path to success and happiness involves college degrees and student loan debt.

But this doesn't look like a path to prison to me. What do you think Mr. Sanders?