*This is where I should warn you about spoilers... but if you haven't seen the movie yet, you are certainly no true fan and you deserve to have your joy spoiled. Three weeks is more than enough time to have caught up to the rest of us real fans.

I saw the new Star Wars movie. I kinda had to. I saw the very first, Episode 4 A New Hope, at a drive-in as a child (I'm showing my age... but I was a very YOUNG child). My firstborn's very first theater experience was to see The Phantom Menace (as disappointing as that must have been for him). We are a family of Star Wars fans, so seeing the new movie was a non-negotiable. Personally, I just wanted to see if Disney was going to screw up a good thing.

They didn't. But could they really have screwed it up as much as Jar Jar Binks did? (Those were indeed sad times in the galaxy.)

There has been a lot of hoopla surrounding the character of Rey, and deservedly so. She has certainly turned the Star Wars world upside down, leaving us with more than a few burning questions. Who are her parents? How does she know how to use a lightsaber? Why can she use The Force without any training? How does she keep her hair in that elaborate up-do?

Rey is totally badass. She has some major martial arts skill, is an apparent mechanical genius, speaks fluent droid and wookie, and she's gutsy in a way that puts most Disney princesses to shame. Over night, she's become a feminist poster child. You could almost hear the collective sighs of female critics on premier night. "Finally," they shouted (and blogged), "A strong female character that can be a role model for our daughters."

Now let me just say here that Leia and Padme weren't exactly weak, whiny, damsel-in-distress types. But also, statements about Rey that start with the word "finally" sweep awesomely strong feminine characters like Disney's own Anna and Merida under the rug of social relevance.

And let's not forget Katniss Everdeen from The Hunger Games fame. No. Rey isn't the first independent, strong-willed, capable, I-don't-need-no-man heroine to hit the big screen. Will we have to do this every time an awesome, take-charge female character shows up in a movie? That could get old quickly.

It's true that Hollywood did drag its feet in giving us female protagonists that are empowered in ways outside of their sexuality. But if we were really looking for strong female role models for our daughters, maybe we should have had them pick up a book or two. Young adult fiction runs rampant with kickass female characters: The Hunger Games, Divergent, Matched, Birthmarked, Throne of Glass. And unless you think this is a modern development, let me remind you about Dicey's Song, The Witch of Blackbird Pond, To Kill A Mockingbird, and Little Women.

The voices that have been crying about a void of female heroes, must not read very many books.

Personally, I'd rather my daughters read tough tenacious female characters than watch them on a screen. Movie watching is a passive experience. You watch a movie as an observer, not as a participant in the action. Reading, on the other hand, is active. When our girls read the stories of Katniss and Tris, Scout and Jo, they actually become them inside of their minds. Perhaps they can take a little piece of those characters with them once they've turned the last pages of those novels. At least a mother can hope so.

Which brings me to the Rey action figure scandal. 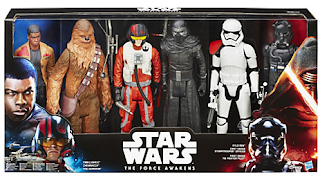 How could the most badass character, the one who saves the day, the heroine, the freakin' main character of the whole entire movie be omitted from Star Wars merchandise? It baffles the mind, but it's true. Finally, women have a reason to celebrate the showcasing of an empowered female all-around badass only to have their rejoicing dashed against the rocks of despair (AKA the patriarchy).

Rey is glaringly absent from The Force Awakens Monopoly (In spite of the game inclusion of Darth Vader, who doesn't even appear in the film. But it's okay... because DARTH VADER!). She is also missing from action figure play sets, Lego playsets, and toy aisles in general.

WHY!?! Seriously marketing geniuses, what the hell were you thinking?

It's enough to make even me cry sexism.

But maybe the toy manufacturers are doing our daughters a favor. Stick with me here. Our daughters (and our sons for that matter) don't want to PLAY with Rey, although she would admittedly be the most amazing imaginary friend ever. No, they want to BE Rey. By stripping the playsets of  perhaps the greatest Star Wars hero in history, they've given our children no other alternative. Our kids will have to use their imaginations to conjure Rey. They'll be asking their mothers for elaborate up-dos and using mop handles as lightsabers. They'll be tinkering with household electronics and using The Force to open automatic doors at the grocery store. They will be forced to pretend, to role play, to actively cultivate their inner badass strength, resilience and ingenuity.

What more could we ask for our daughters (or our sons)?

Great post! I didn't even notice this about the merchandise. And love the ending about imagination :)