There's No Time To Spare

My youngest child is trying to leave me.

My youngest daughter is in the process of applying to an Early College program. If things go the way she has planned, in the fall, my home will be empty during the day. If she gets in (and chances are very good that she will) I will no longer be able to introduce myself as a "homeschooling mom". Cue the imminent identity crisis... or the killer mid-day party. I haven't decided which.

She is a very goal-oriented person, in spite of only being thirteen. She wants to get into this program something fierce, so she is tackling every aspect of the application process with everything she has. This week she was called into the school for an interview. A bundle of nerves and anxiety, she asked me to help her prepare. So, we ran some mock interviews in the living room with me asking her some generic questions I thought the school staff might ask her. 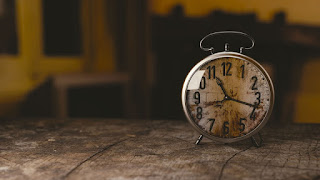 "What do you do in your spare time?"

Seems like a pretty standard interview question, right? Maybe not for the average homeschooler.

She gave me several seconds of a blank stare, before she screwed up her face in frustration.

"I don't really do anything. Sometimes I read or watch TV."

Which left me giving her my own confused blank stare.

"What about karate? What about mixed martial arts? What about archery tournaments and volunteering with kitten rescue and fishing in the river?" She is an incredibly active teenager. I couldn't figure out why she was being so dull and vague with her answer.

That's when I realized that her definition of "spare time" and mine are very different. To me, and probably any interviewer, spare time would be any activity she does that isn't school related.

But that isn't how she sees life, and I think I like her view better. To her, spare time is just the tiny spaces of time between the activities she wants to be doing. Time spent training in martial arts isn't "spare" because it's a necessary investment toward a goal. The same is true of the hours she spends practicing with her bow to prepare for an archery tournament. And fishing and nurturing abandoned kittens isn't "spare time" either. Because she's busy doing things she enjoys.

It is actually a sad testament to the rest of Society's general mindset that anything outside of work or school is "spare time," as if the only important time is what is used to make money. Or as a minor, it's the time spent in school getting ready for the real world, which is basically prepping you for a career and a job and making money.

Anything else we choose to do as human beings, no matter how magnificent or productive or fulfilling or charitable is just relegated to whatever time we have to spare from our jobs. It's a pathetic mindset, really.

The truth is we don't have any "spare" time. We only have time. And probably not as much of it as we think.

There are so many worthwhile ways to spend our time that don't involve making money or good grades. The time we spend doing the things we love, that make us come alive, that propel us toward excellence in any field, even when it isn't career related... Maybe that time shouldn't be considered just leftover time. It's all just time. A minute spent making a paycheck is just as long as the minute spent reading a book or walking the dog or painting a picture. We shouldn't consider one minute to be any more important than any other.

This week, I'm trying to shift my attitude about time. I want to think more like my young daughter. I want to spend my time doing things that give me joy, make me come alive, propel me toward personal goals. Because that time isn't any different than the time I spend meeting responsibilities, mopping floors, or working a job.

All time is equal.

And there really isn't any time to spare.
Posted by ajoneswebb at 12:13 PM