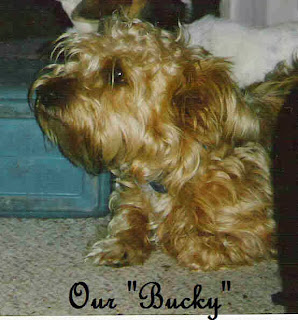 Wednesday I had to make the hardest decision I have ever had to make.  My dog of almost 15 years went for his last "bye-bye" ride in the car.  A once spunky, energetic dog had grown old with arthritis and cataracts.  He caught a nasty cold that his old body just couldn't shake. He was moaning and panting and hardly able to keep water down on his stomache.  So after two sleepless nights, one spent curled up with him on the floor of our bedroom, the second with us camped out on the futon downstairs, I couldn't stand to see him suffer anymore.  So we took him to the vet where capable hands helped him let go of this life.  We stayed with him petting and consoling him and then brought his lifeless body home in a cardboard box.

Buck was one awesome dog.  He came into my life at a major transition point.  He was born under my grandmother's couch when I was just 18 and a freshman in college.  He helped me pass from childhood to adulthood.  He was a real security when I moved into my first apartment.  He was a great watchdog, with a bark much bigger than his terrier body, a fierce protectiveness.  He helped two young college girls feel safer in a scary world.

Later after I was married, he was mine and Keith's first child.  He loved belly rubs and would asume the belly rub position if you called him "baby boy."  He followed me everywhere, and became anxious if locked outside the bathroom door.  He just wanted to lay at my feet all of the time.

When I became pregnant with my first child, I felt more than a little bit guilty about displacing poor Buck.  He would curl up with me on the couch, head propped on my big pregnant belly, while Daniel the fetus kicked and punched him through the uterus wall.  When we brought Daniel home, Buck danced on his hind legs trying to get a good look at the little intruder, until I bent down for him to get a good sniff.  He seemed to approve.

Later, as more children came into our family, Buck embraced his new role of "family dog".  Ears and tail became fun baby toys.  Tasty goodies were always to be found if he waited patiently under the highchair.  And he loved to fetch baseballs the boys hit in the yard.

Thursday, after one last ride by the beach where a younger Buck had loved to play fetch with an empty Pepsi bottle in the surf, we burried him on my Grandmother's property where he was born.  We layed him in a cardboard box that the children decorated with hearts, flowers, and messages of love and good-bye.  He was wrapped in his bath towel, with which he had loved to play tug-of-war and with his favorite pull toy.  He rests under a beautiful dogwood beside his mother, a poodle-chihuahua mis who loved to drink cheap beer, and his father, an AKC registered Yorkshire terrier.

I miss him terribly.  It feels like a chunk of myself is missing somewhere, and I'll never get it back.  That dog loved me no matter my faults, failures or shortcomings.  He was always ready and waiting at the door when I got home and happy to just have a pet and a kind word.  He gave so much and never asked for anything in return.  He was a true and pure example of unconditional love.  I am thankful to have been blessed to share almost half my life with such a truly precious soul.


Good-bye Buckus.  Meet me on the Rainbow bridge. 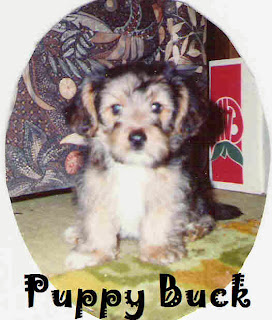