Women and young girls have been basing their life choices on Glamour magazine for generations, so we should obviously take an event they sponsor with every ounce of seriousness we can muster.

Michelle (and her stage buddies) gave plenty of valuable advice to the impressionable young girls in the audience on subjects like relationships and sex appeal. However, education was the main highlight of the event which was thrown to publicize Obama's "Let Girls Learn" campaign.

"Compete with the boys. Beat the boys." 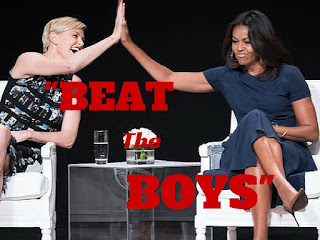 While I can easily get behind FLOTUS's initiative to educate girls around the world who are regularly denied an education, this piece of advice given to United States school girls makes me shudder in disgust.

As the mother of two daughters, I cringe. Once again, we've set males at the gold standard level. We've waved an assumption at our daughters that boys are the ones succeeding, the ones who are capable, and that if they can just reach their level, they will have made it.  What if they are capable of more than the boys around them? Allowing our girls to set their own standards of achievement and success validates them as individuals. It puts the power of choice and the success of their education in their own hands... not the hands of their male peers.

I want my daughters to define themselves. I do not want their self-worth based on how they compare to boys.

As a mother of sons, I cringe even more. "Beat the boys" sets a generation of young men up as the enemy, a force to be subdued at all costs. Sure boys can be kind of stinky, but they aren't the bad guys. Boys are already trapped in an education system that all too often fails them. Statistically speaking, boys now lag behind girls on almost every academic measure. They are more likely to be drugged (for hyperactivity "disorders"), more likely to get in trouble, and more likely to drop out of school than their female peers. 70% of students in special education are male, and 25% fewer men than women graduate from college.

Really not very much of a gold standard when you think about it. When the statistics are laid out bare for everyone to see, it doesn't seem like "beating the boys" is all that difficult a task. Maybe it's the boys in this country who need the interventions and the Glamour magazine-sponsored pep talks.

Maybe it's our sons that we are failing, not our daughters. Here in America, it is our boys who are largely being denied an education.

But that doesn't fit the feminist narrative.

It doesn't sound like FLOTUS is all that concerned about girls succeeding in school. It sounds like she wants them to have bragging rights. "Beat the boys" isn't about equal rights. Now we want girls striving to be the ones succeeding and in power, that men by default should be inferior. This is why so many women (and men) can't stomach the feminism label. Our boys of today can't atone for the generations of misogyny of which their forefathers may be guilty. It doesn't work that way.

Ultimately, I'm upset that someone with such an audible platform chose to reduce education to a competition. Learning isn't all achievement. It isn't just staying in school, earning A's and being better than the kid in the desk next to you. Learning is an ongoing process of life-experiences and exposure to new ideas and concepts. It is interacting with one's environment and expanding consciousness. It's not excelling at standardized tests so you can bust through the mythical glass ceiling.

Perhaps Michelle's heart is in the right place. She doesn't want girls to be afraid of academic success. I get that. I certainly don't want my girls to hold themselves back from doing their personal best just because of what others might think of them. But there are so many other better messages she could have chosen, messages of hope, love, and positive encouragement.

"You can be whatever you want to be if you work hard enough."

Instead she chose a negative message to promote a positive cause. Interestingly, I learned in school that a negative times a positive is still a negative... and I'm just a girl.

Michelle Obama is just another politician who chooses to divide the masses instead of uniting them in a worthy cause.

But at least she got a nifty hashtag out of it.
Posted by ajoneswebb at 11:33 AM

Fantastic perspective! Glad to see someone else voicing the same concerns I see everywhere. Why divide and concure when we can instead unite and thrive. I think boys and girls can learn so much from each other and can really compliment each other. As a homeschooling mom of a son and two daughters, this message she is touting is quite disturbing and I do agree that it sets up an entire US generation of boys to be brought down even more than they are... It's sad that as adults we continue to set crappy, competitive examples to our kids. When in all reality, learning to work together with the opposite is crucial!