Sleeping Through The Night 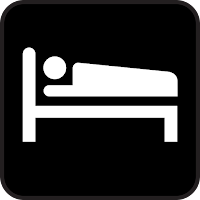 There was a time (before I had children) that I actually slept. I like to refer to those as The Golden Years. They were wonderful. I could sleep like a freakin' hibernating bear until well after noon. Walls could crumble around me, and I wouldn't stir. I could sleep through alarm clocks and heavy-footed college room mates. During that magnificent era of my life, I could snooze right through my husband's snores and the neighbor's early-morning yard work. Nothing fazed me. I was incredibly well-rested.

Then child number one came along. It started before he was actually unleashed. During pregnancy I would be up 4-5 times a night with a bulging bladder that needed to be released. During one late night stumble to the bathroom I remember thinking, "If I could just have this baby, just get his head off of my bladder, maybe I could get some sleep."

The gods are cruel.

The sleep of mothers is fitful and light. Every little squeak, or rustle, or deep inhalation of my precious newborn son had me up and alert and ready to slay demons... or at least nurse him back to sleep before he was fully awake and ready for his day at 4 AM. Even after my babies grew into toddlers, the slightest whimper from across the hall had me wide awake, one ear cocked toward the door, ready to slip into my Super Mommy cape and chase away nightmares or usher little bodies toward the potty or offer midnight sips of refreshing water.

Having children turned me into a light sleeper.

For years now, I've wakened to creaking floor boards, passing traffic, early-morning birdsong, the drip of the kitchen faucet. My children can roll over in their beds upstairs and I will wake up. It used to be a blessing, back when the children were small and still needed me. It's since become a curse. Now they are old enough to tend to their own night time needs, yet I still rouse from deep, dream-filled sleep just because someone quietly shuts the bathroom door on the second floor.

It's been some time since I slept through the night, although my children have been doing so for years.

Yesterday, my oldest child started a new job that has him leaving the house at 5:00 in the morning. I was as grumpy about it as he was. I figured I'd be awake against my will the minute he started stirring around, coming down the stairs, pouring his cereal in the kitchen. Then I would certainly hear him leave out the backdoor, which just happens to be right outside my bedroom. It's a temperamental old house and the door has to be almost slammed for the latch to catch. And then I would certainly hear him start up his truck, with it's overabundance of horsepower and the way he likes to rev the engine as he pulls out of the driveway. I was mentally preparing myself to be up and awake way earlier than any human should want to be.

But my eyes flew open in a panic at 6:20. I had been sleeping hard. The kind of sleep that leaves your pillow drenched in drool and sheet marks etched in your face. I sat straight up in bed convinced that my son had slept through his alarm and was majorly late for work.

I had that anxious ache in my chest like I had failed him. How could I let myself sleep when he needed me? I should have known better. I should have made sure he didn't oversleep. I should have been there for him and now it was too late.

I immediately kicked into Super Mommy mode. I was ready to throw on a robe and rush up the stairs yelling for him to wake up and hurry. He was late! But some smidgen of early morning sense made me wipe the slobber from my cheek and part the bedroom curtains to see that his truck was actually missing from the driveway.

He wasn't late for work at all. He had managed to be completely self-sufficient while I dozed. He had poured cereal, and slammed the back door, and revved his engine... and I had slept through it all.

I finally slept through the night. It was blissful.

It only took me nineteen years.
Posted by ajoneswebb at 11:11 AM