Silent Sam and the Things That Never Change

Friday, we dropped my oldest daughter off at UNC Chapel Hill for her first year of college. I had put off thinking about it all summer, stuffing down emotions, procrastinating in my usual way, promising to deal with it later. 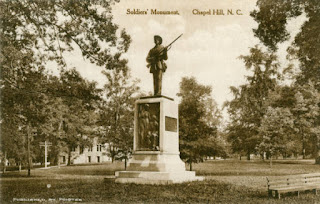 That morning we packed the family car with everything she would need - at least a dozen pairs of shoes, a case of ramen, over-priced text books, strings of Christmas lights. There was only a small space left for her. She had to carry her potted cactus plants on her lap for the entire two-hour drive.

The weather was sunny. The temperature well into the mid-90s. It was hot work toting box after box up several flights of stairs to a tiny, drab dorm room where she will spend the next months. We lofted her bed, assembled a brand new futon, hung pictures.

It didn't take long for us all to get sweaty. It felt like labor. It made me remember another kind of labor, 36 hours of contractions to birth her.

Letting go of a child is hard work.

In my normal procrastinating way, I put off good-bye as long as possible, making her bed, unpacking her clothes. I actually unfolded, then carefully and deliberately refolded each piece before tucking it inside the dresser drawer. We bought sushi on Franklin Street, eating slowly, savoring each individual bite, dragging out dinner much longer than was necessary.

But you can't procrastinate forever, in spite of your best efforts. Good-bye was inevitable and the emotions came gurgling up from the place I had been stuffing them all summer long.

"I'm going to wait to have my emotional breakdown until I'm in the car," I told her.

"Me, too," she said throwing her arms around me as the tears started flowing. Hers first, then mine. Just like the day she was born.

And suddenly, in that moment, she wasn't the stunning and confident young woman I had lived with all summer. In her place was a toddler, the one who had held my neck with a death grip, clinging to me like a cuttlefish. She had super human strength, like her arms were made of suction cups, impossible to pry open.

I could have held her forever, but that isn't how things work.

The walk back to the car without her felt all wrong. In my heart, it still felt like I was walking away from that small, helpless toddler. How was I supposed to protect her from so far away?

My mothering instincts hadn't caught up to the fact that saber tooth tigers weren't lurking around every corner waiting to rip my baby to shreds. Although college might hold some danger, my rational brain knows she can handle it. She is a confident, mature, responsible young lady.

Children grow much faster than mothers are able to let go.

Monday night, she sent a message to the family chat. (Yes, we have an active family chat. I like to think that makes us the cool family.)

"Silent Sam is down! Protesters toppled the statue."

Silent Sam was an iconic Confederate monument on UNC's campus. The statue, an image of a Confederate soldier, had stirred up a lot of controversy in last year's Southern hysteria surrounding historic monuments.

We had passed him on our way to get sushi.

"I'm surprised nobody has torn him down yet," my daughter had commented.

All of us had known it was only a matter of time.

My husband quickly pulled up internet video footage of the mob shouting and kicking at the fallen statue.

"Where are you?" My thumbs could barely type the message.

The only thing that mattered, the ONLY THING...

Was whether my child was safe.

She grew up in a small, quiet, Southern town. The rowdiest people get is right before the threat of snow flurries, as everyone rushes the local Piggly Wiggly for bread and milk.

"Stay in your room," I typed back, thumbs still trembling.

Mothers spend 18 years in vain attempts to keep their children safe, only to send them out into the thick of things where they are anything but.

Silent Sam was not a real person, but a representation, a symbol of the more than one thousand UNC students who fought on both sides of the War Between the States.

I can't help but empathize with Silent Sam's mother, symbolic just like her son.

Each of those mothers, on both sides of the conflict, spent 18 years keeping their children safe only to send them out into the thick of things, where they were anything but.

They were mothers from small towns like mine, where people don't get particularly rowdy. Those mothers must have felt the strong arms of their children as they said good-bye. Those sweet mothers must have thought of the toddler grip those arms once held on their skirts, their hands, their heart. They remembered the feel of chubby arms wrapped around them.

Did those mothers wish they could hold that child just a little longer?

The only thing that mattered was the safety of her child.

"Where are you?" she must have prayed each night.

Only some of those mothers never heard from their children again.

It is in a mother's nature to wish a safe and peaceful life for her children.

It is in a child's nature to make a difference, to change the world, to be right in the thick of things.

Some things never will.
Posted by ajoneswebb at 2:21 PM

Enjoyed reading this. Thanks for sharing :-)